Soooo – I know the comic is a bit late, but I have not been idle. Nor has Brian. We are now really, truly and officially out of preproduction. The hernia was to transition all the assets, including out titular heroine, into Unreal Engine 5. It was a seemingly Sisyphean task, involving lots or frustration, hard hard work for my dauntless perfectionist animator and some creative innovations to solve the problems that they can absolutely take complete credit for solving.

We are now in production and animating scenes for the final trailer in UE5. Well, why did we go to UE5 in the first place? If you look at this picture, maybe you’ll understand. It’s representative of what you will be seeing on screen, and this is just one frame. UE will show you 60-120 fps of THIS in real time.

I’m extremely pleased. This is much much more than I thought I wanted. She’s going to live, breathe and act out the story in the world we’ve created.

Naturally, if you want to see more, then go to Patreon.com/ JEDraft

Our ongoing incompatibility issues with the new WordPress are still not worked out, and I am afraid I might have to just redo the whole site again, but until I absolutely have to do that, I have this kludgy workaround.

See at the top menu on the right, “, I have converted the entire history of the web comic into a series of yeary PDF files that any one can download.

It’s not elegant, kind of a brute force workaround, but at least you all now can really start at the beginning and read the whole thing at your leisure.

Many thanks for your patience, and with hopes of a permanent solution in the near future.

In this, the final version we’re doing of this proof-of-concept video, Brian put in more fancy stuff and fixes and attention to wonderful details.  Now we dive into production of the actual product, beginning a trailer for the series itself with all the new elements and knowledge we have put together so far.

Rubbing my hands with glee.

This is the proof of concept for Zona in action. Brian’s solved a truckload of challenges and details with the hair and cloth simulations, animation and incorporating it all in the impressive realism of Unreal Engine.
I put the music in … 🙂 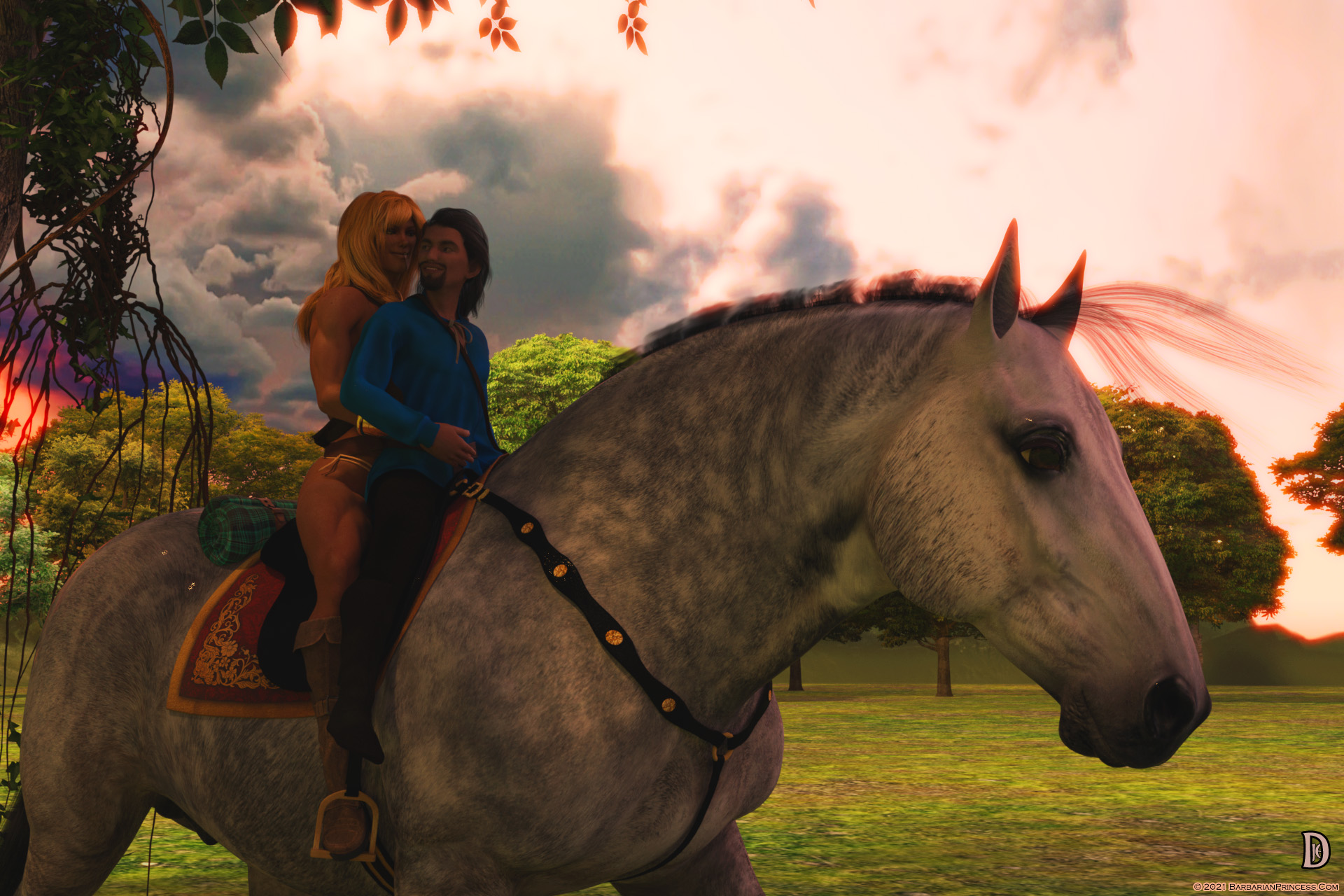 We are moving from California to Connecticut, and we’re driving with the dogs and cat and so for the next couple of weeks the updates are going to be sporadic, and communication with you all might drop out. Never fear, we will return as surely as the sun rises and sets on our VW camper van. Still, I might have a little surprise for you Thursday or Friday. Stay tuned!
Warmest regards,
-JED

This is the final version of Zona in Unreal Engine before we begin full production on the trailer.  Long time coming.  Brian’s outdone himself, IMHO.

She breathes, she moves, she inhabits the space.  Next update will have her in full-on sword-slinging action.   Brian wanted to show her being something other than angry and hulked out, so he imagined her swooning at the sight of Mentl.  I said that’s not really how the story goes, but it could be her first sight of Mentl naked, which is, well … long-time Zonaphiles know about Mentl’s Pride.

This is the realization of a dream I’ve had for a very long time, to bring Zona and Mentl fully to life in an animated series telling their story. Romance, violence, adventure and sexy stuff! Thanks to all of you for your support, and especially to all the Patreon Patrons for the generosity that they have shown and continue to show.

We have been at this for a long time now, and using Daz Studio for animation is adequate, but we needed much much more than it could deliver in order to do justice to Zona’s world. So we have ported all the Daz character assets into Unreal Engine, and Brian is finding that this is not only more realistic than we could have realized before in Daz, but also so much faster that he has accomplished more in six weeks than he did in six months before – maybe more. For myself I could not possibly be more pleased. This is a huge game changer!

This little teaser is a taste of what we will be making the series look like. It’s just the prelude to the opening scene where Mentl comes upon the Urtts. In 2021 the real stuff begins.

Until then, judge and compare the previous efforts to what Brian’s doing now.

Enjoy, and don’t forget, the patrons on Patreon.com/jedraft are going to see more sooner and enjoy additional benefits and rewards as well!

NOTE ALL:
We recommend that the video be watched in at least 1440 at 60fps for full effect.
Auto video quality in Youtube is set to much lower than that due to a decision on behalf of Youtube to decrease playback quality as a response to the increased use of broadband during the current crisis.

There are however, some ways to defeat this, as detailed in the video here: 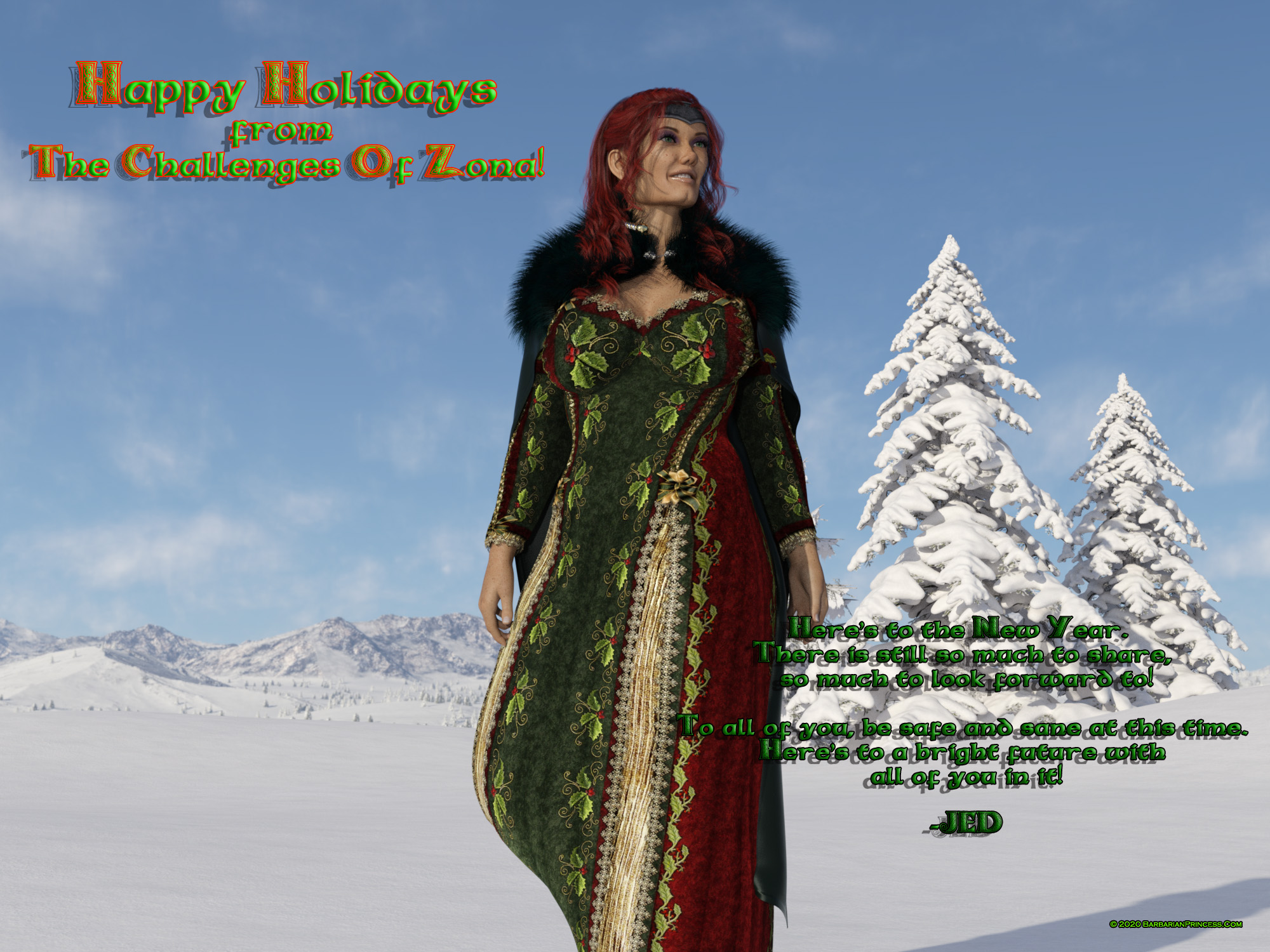 Best wishes to all of you! Be safe!

We will soon have really exciting news for you, so watch this space!

One of my favorite webcomics is “Yet Another Fantasy Gamer Comic” (https://www.yafgc.net/). Its creator, Rich Morris is a telented professional who has been creating these delightful fun, engaging and funny long form fantasy comics for years. At long last he’s got himself a Patreon site so that we can give back a little for all the free stuff he’s put out there.
My Zonaphiles will recall when he did the portrait of Zona and Mentl, and now as part of my Patreon-age, he’s doing a finished portrait of my choice. And I chose Ipola. The prelim sketches see below.

Frigging finally, after hours and hours of solitary toil to make a visual novel/game of Zona (including an abortive attempt to export it which meant I had to practically recreate it from scratch) I have a 0.01 beta version as a demo. It is short and a bit rough around the edges, but I hope you all have fun with it.

Set in the master bedroom of the Hollywood mansion right after their engagement party, it’s where Zona confesses to her new silver-bonded Mentl the one thing that she has been keeping to herself forever.

In a way, this returns Zona to her origins in the adult find-your-path books she was created for, as the visual novel medium is just a higher tech version of that. Also, it’s very dirty. Definitely NOT safe for work.

I think of this as a “proof of concept” for one more product and direction we can take the characters and reward my wonderful Zonaphiles. Frankly, I think she lends herself to this medium pretty handily.

A one dollar patronage at patreon.com/JEDraft gets you access to this and much more!